Magos Explorator of the Adeptus Mechanicus 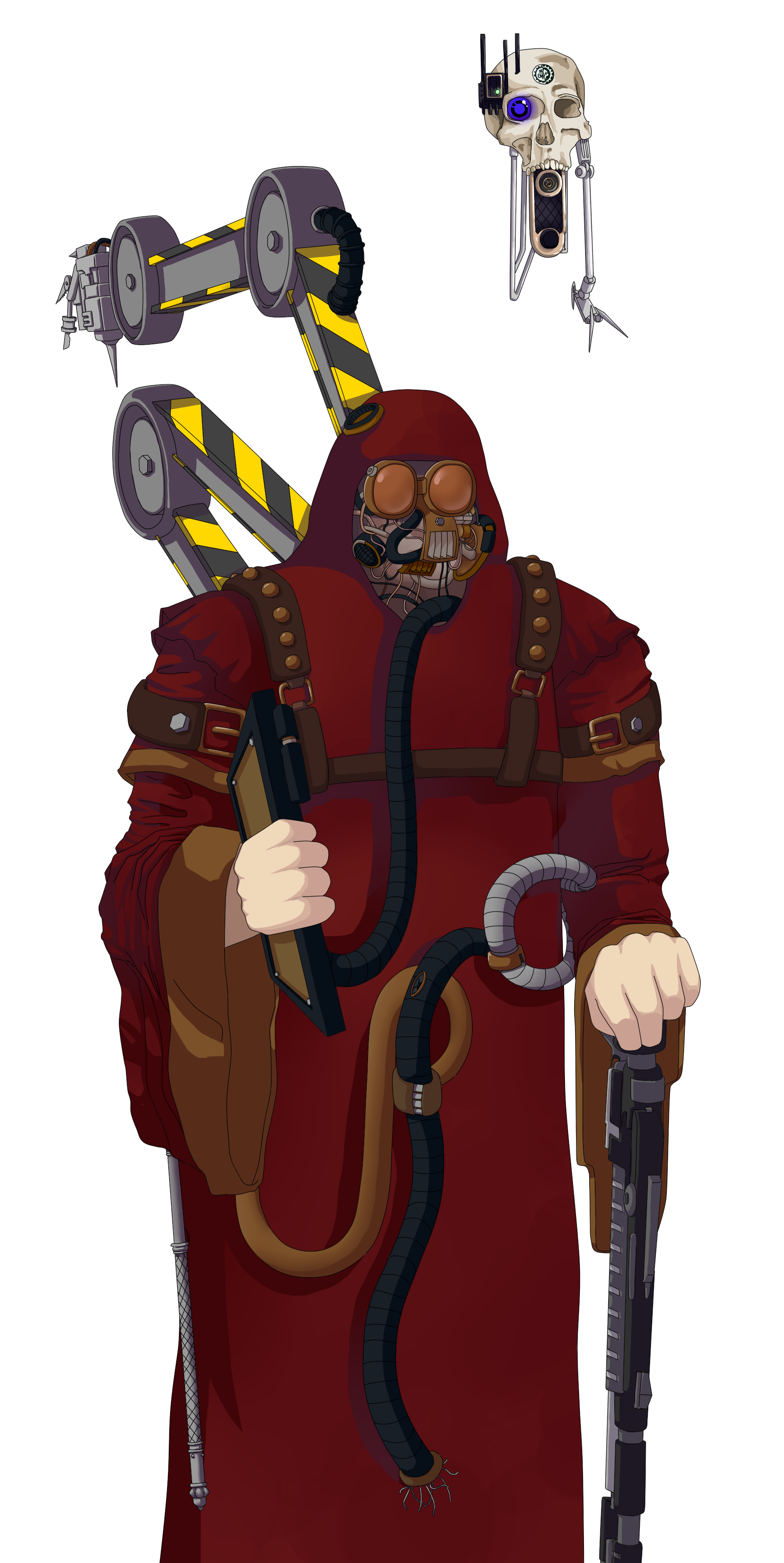 Magos Kennoch was a not-exceptionally-tall (~6'2"), borderline heavyset bald man, originally, but due to the increased mass of the metal he carries, he is somewhat hunched over, and much bulkier. This bulkiness is exacerbated by the rust-red holy robes of the Adeptus Mechanicus, which hang loosely over his wide shoulders. Except when demanded by special occasions, his skin is neglected in terms of hygiene, and is usually oil-stained to the point that you can hardly tell the original color, except on his hands which are scrubbed clean to allow the copper-colored slightly shiny electoo inductors to have a clear connection. His robes and the metallic parts showing, however, are cleaned regularly, glinting in various colors based on the light. The upper portion of his face is recognizably human, covered as it is by thick goggles serving to protect his eyes from all manner of small objects that may fly off during work or combat, but below them the flesh has been replaced by a mass of tubes and vents, with a set of two loudspeakers of differing sizes on opposing sides, the woofer (3 inches diameter) on the left and the tweeter (1 inch diameter) on the lower right. Projecting from just left of his right shoulder blade is a folding mechanical arm, painted black with hazard-yellow, with four half-meter sections culminating in a block of smaller tools, amongst them a 6-inch fold-close monoblade. He wears a specially fitted (to accommodate the mechadendrite) power cell backpack, which is connected via thick cables to a rifle-sized hellgun holstered on his right hip. On his other hip, he carries a fairly large power axe, etched with the runes and imagery of the Omnissiah, as well as an archeotech laspistol, much smaller and less extravagant, but still quite deadly. In pockets in the lining of the left part of his robe are a number of tools, including a data slate, a combi-tool, a multi-key, and an injector, among others appropriate to the work of a Tech-priest. Only when he needs access to these tools does the Carapace Armour he wears beneath them show.

Kennoch's Potentia Coil, while not exceptionally heavy, is mounted towards left of center, causing him to seem to favor his right leg when walking and standing, although it is not enough to be called a limp. The most notable effect is instead that his bootfalls alternate in loudness. His servo skull always returns to a position three feet above him and slightly to the left, ceiling permitting, and communication is done through the MIU, rather than binary chatter, making it easily-forgotten if one does not remember to look up. In social settings, Kennoch stands slightly apart, remaining standing unless asked to sit, speaking bluntly when he has relevant information, but otherwise he remains awkwardly silent in the background.

Kennoch's voice is vaguely distorted in a way that is hard to describe, both too high and too low; lacking in the midrange. The different directions the two speakers face causes strange acoustic effects. It is noticeably faster than normal speech, though not unintelligible, and takes longer pauses because thought, even as aided by the cranial circuitry, can only go so fast. There is the slightest perceptible delay between the tenor from the tweeter and the bass from the woofer, and combined with the pitches, it gives the impression of two people speaking in near-perfect unison. The woofer is prone to momentary pops and breaks, noticeable, and even annoying, but not harmful to intelligibility. There is a distinct lack of anything like "uh" in his speech, it instead replaced by the speakers shutting off and on for a moment with audible clicks. Due to the unreliable wiring to the woofer, as well as the slight delay, only the tweeter is used in speaking Techna Lingua. The quality of synthesized voice, excepting the above flaws, is generally good, though it would not pass for natural, and it varies when Kennoch is playing back or imitating something else. He speaks in absolute monotone, although he is capable of choosing exactly which tone that is. His speech shows a definite preference for formal speech, to the point of sounding measured or even deceitful. Many short and common statements are actually recordings of his voice from before the respirator was installed, words such as "Affirmative" and "Captain" are spoken by a different voice. The voice switch is audible as a soft click. This allows him to not need to be distracted by the enunciation of many of the most common utterances, and allows them to sound somewhat more natural than the rest of his speech.

There are a few presets for Kennoch's voice-synthesizer, which may be delineated as follows:

"Ttch- Perhaps ... captain -Tck- when you make -Fizz- deals in the -Cck- future -Chk- you should agree to terms that are -Crk- actually realizeable. -Tlk"

Kennoch was born on Belacane, a forge word in the Calixis Sector. Shortly after becoming a Magos, he joined the Explorators, and set off for Port Wander in the Koronus Expanse. He found a captain in need of a Tech-priest, a Rogue Trader called Gallus, and became his Chief Engineseer. In less than a month, however, that arrangement would be shattered. On what had seemed to be a perfectly uneventful warp-jump, and with less than an hour before realspace entry, the ship's cogitator reported a small trouble with the reactor. Kennoch, thinking little of it at the time, went to the core of the ship to make certain that the core maintenance workers were doing their job, when suddenly the lights went out, and along with them the Gellar Field. In less than a minute, the reactor normalized, once again bathing the ship in the reality-preserving effects of the Gellar Field, but it was already far too late. The ship was flooded with minor daemons, and not more than one in a hundred of the crew survived, most of them too insane to let live. The ship's cogitator, not notified of any of this, commenced the realspace transition normally even after the death of the majority of the command crew. Shortly after recovering, Kennoch sent a distress signal to Port Wander, where they had been about to dock for routine unloading and repairs.

Too proud of his achievements to let the horrors of that day stop him, he immediately commenced anew his search for a new ship. Before too long a wait, in which he may have rethought his plans, he was approached by a man named Vos. Having been granted a ship, but no people to man it, he was somewhat desperate, and Kennoch's lack of much flying time was only the smallest of issues. Now, he is Magos-Explorator Kennoch of Belacane, Chief Engineseer of the Slayer of Paimon, in service to Captain Vos, a title he speaks with none-too-little (and deliberately voiced, see above) pride. In the short months that he has been in service, he has already proven himself an essential asset to his captain. However, the past is not past to all, and the family of the late Captain Gallus is neither small nor forgiving. 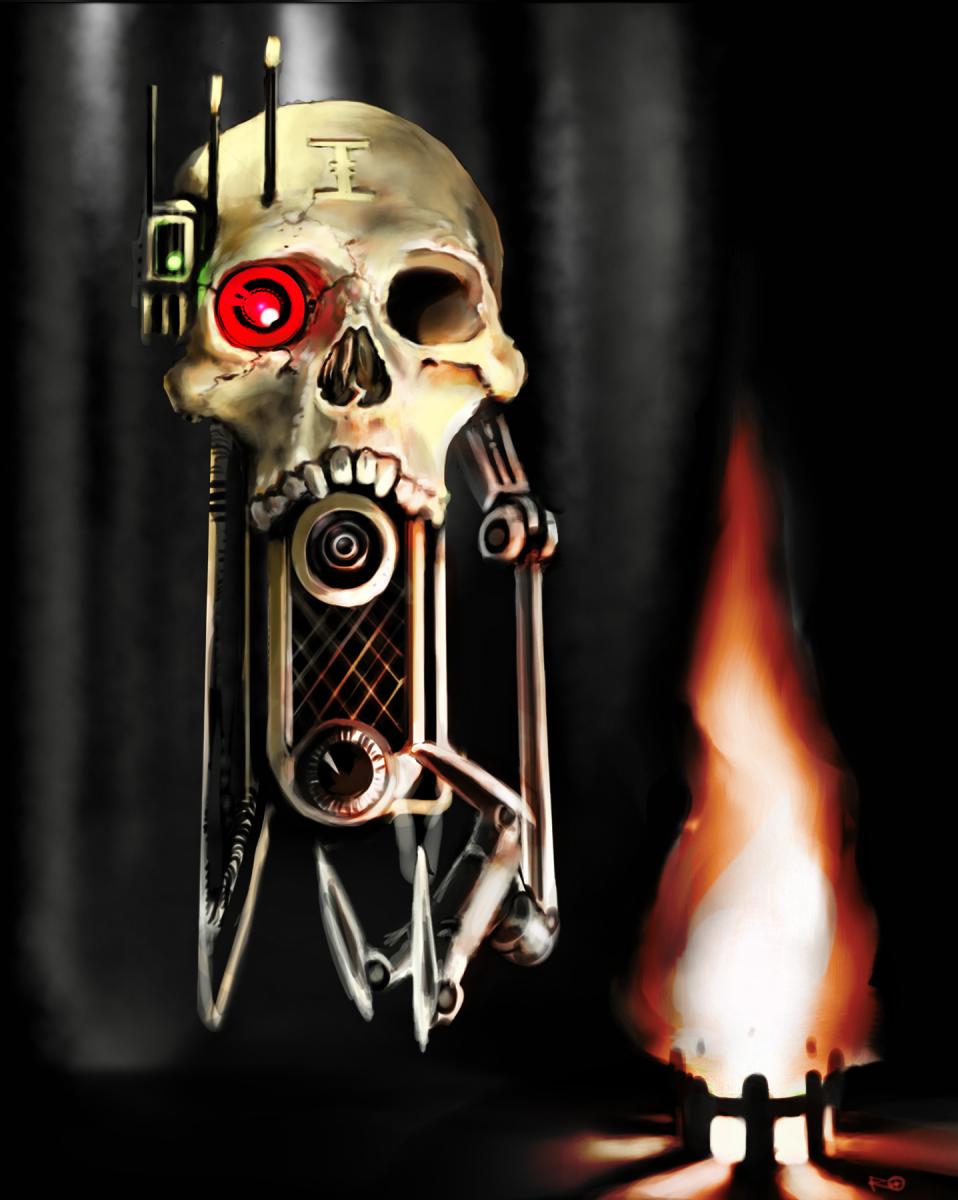